Spin the Wheel: Tracklib Teams Up with Mass Appeal, Brings Rhythm Roulette to All

Tracklib dares you to spin the wheel and play your own round of Rhythm Roulette, the fun challenge video series from Mass Appeal. And as a special nod to Tracklib, legendary East Coast hip-hop producer Rockwilder flipped a track from the online sampling library on the latest installment of the popular YouTube series.

Mass Appeal’s Rhythm Roulette gets top producers to make a beat sampling three records picked at random (where the roulette part comes in). Over the past four years, the YouTube series has showcased producers’ technique and artistry, shining a light on what makes a producer great in a world that often favors emcees. Over a hundred producers--including Large Professor, Just Blaze, Erick Sermon, and DJ Jazzy Jeff, to name a few--have taken on the challenge so far.

The resulting videos are riveting and wildly popular, and now Tracklib wants to get its producer community to do more than watch. It has teamed up with Mass Appeal to give all producers the chance to play Rhythm Roulette, by building out a special themed feature on the Tracklib site. “We created a wheel that’s a nod to the one on Rhythm Roulette. It gives you three random tracks from our catalog to play with,” explains Tracklib’s Per Stenius. “You sample the track and make your beat.”

Beatmakers can spin the wheel once a day, run with the results, and submit their favorite beats to Tracklib, as part of a month-long contest. Rockwilder will personally pick the winner. The first prize is a trip to New York (from anywhere in the world), for a private studio session with Rockwilder at Def Squad Studios.

The contest reflects Tracklib’s mission to empower emerging producers, as well as support big names, as they create fully licensed tracks under reasonable, affordable terms. Recent and soon-to-be-released tracks from Young M.A, Charlie Heat, Vic Mensa, BROCKHAMPTON, and Mary J. Blige all featured Tracklib-licensed samples. For as little as $50, producers can license most tracks on Tracklib without the delays, negotiations, or onerous legal complications that plagued samples in the past.

"You can go to Tracklib, test out three greatest joints, and see what is up,” Rockwilder says.
at November 12, 2019

Get Your Free Report: 3 Career-Killing Mistakes All Musicians Make It’s time to level up your music career game. In this free and eas... 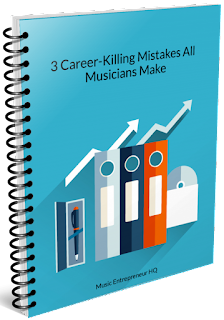 Click the image to start receiving our no-fluff newsletter in your inbox.